skip to main | skip to sidebar

All Hail the Domestique

Domestique is a french word for servant. Initially it was used in cycling as an insult for the first rider to offer his services to assist another rider. Back when there were not teams and cycling was a brutal display of individual endurance, tenacity and determination. Now those elements have not left the sport, but the battlefield has changed as teammates try to assist one another in their goals.

Domestiques are the coolest guys in the peloton as far as I'm concerned. Everyone loves to cheer for a superhero like Lance Armstrong or Alberto Contador, but what they don't understand is the help they are getting from their teammates and domestiques. Some of these "behind the scenes" guys are so good at helping their team leaders that they have even earned the title of "super-domestique." Jens Voigt, George Hincapie, Levi Leipheimer are a few examples to name a few. All of them are accomplished cyclists in their own right, but what makes them greatest and most valuable in a race like the Tour is there ability to watch out for their team leaders.

I saw an awesome example of this by Team Saxo Bank two days ago when there was crashing and carnage like none other during stage 2 of the Tour de France. The whole day, the Saxo Bank boys had been riding close to the front chasing a breakaway to try and keep their man Fabian Cancellera in the yellow jersey. Suddenly on the descent of the very last hill all hell broke loose and riders started going down all over the place. The road narrowed and it had been raining hard for almost half and hour. Riders just couldn't keep their wheels under them in the slippery conditions and then gravity took it from there.

One of my favorite riders, Andy Schleck, was included in this crash along with many other very good riders. I was afraid that he would be out of contention for the overall and maybe even out of the race altogether by the way he looked. After looking stunned for a few moments though, another teammate came over and gave him his bike, none other than Matti Breschel the former Danish national champion. Then Jens Voigt dropped back from the lead group to help and Frank Schleck who had also crashed (Andy's older brother and current Luxembourg National Champion) both did their best to get Andy back to the front since he is Saxo Bank's team leader. 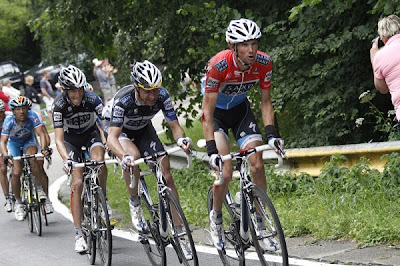 Talk about selflessness. It's just stinking awesome. No two ways about it.
So the next time you decide to sit down and watch a bike race look for the guys in front doing all the work and say an extra hurrah for them. Without those riders to help, the guys standing on the podium at the end of three weeks might not have ever made it.
Posted by cragthebikeman at 2:18:00 PM